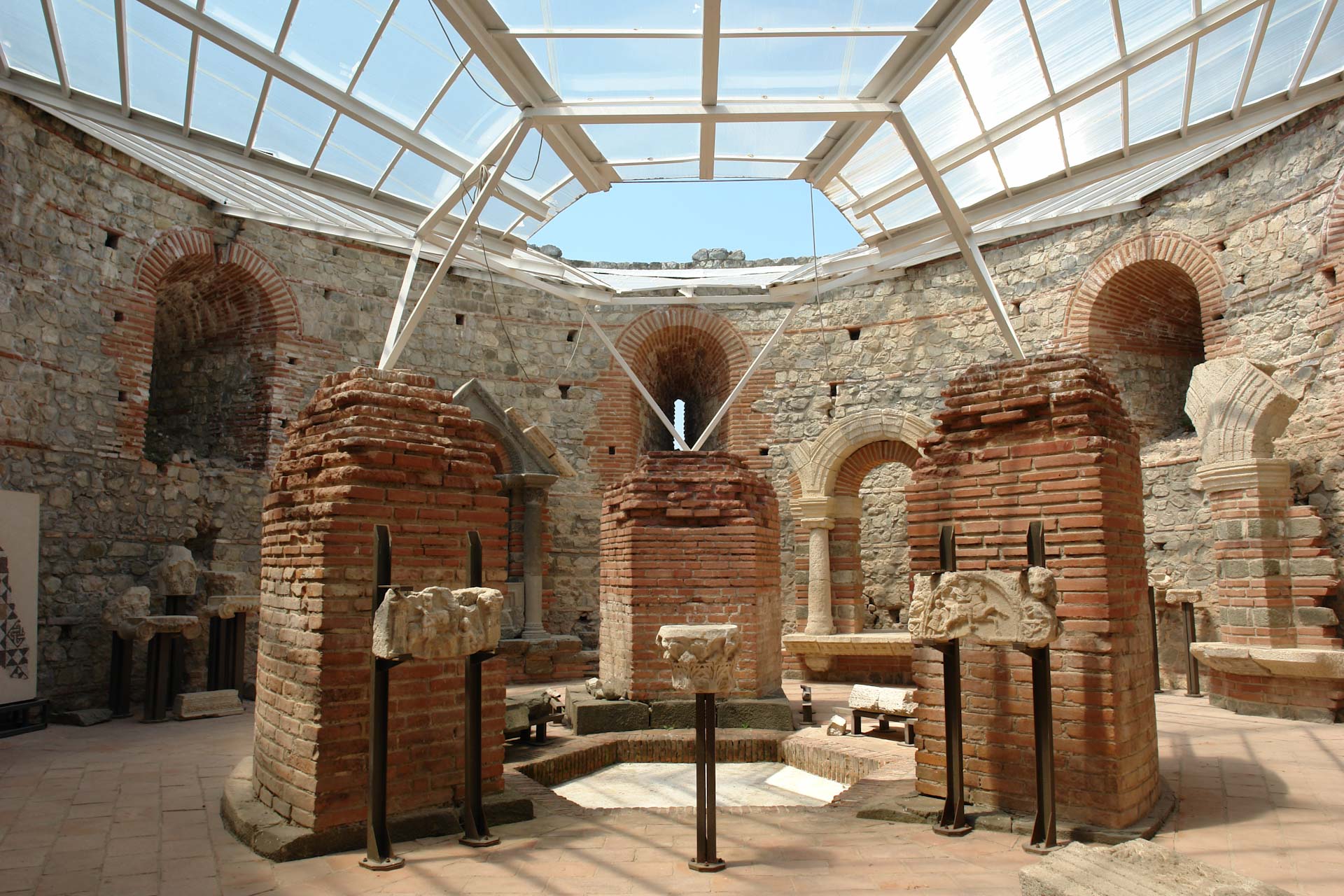 East Serbia, where reality becomes mystical wild, and alluring. The region where Roman Emperors built their palaces, thermal baths, grown grapes, and made wines. The place where hospitality starts after saying Hello, where nature is breathless, where food and wine are unique, and a place of pre-historic settlement of Lepenski Vir.

After a short drive from Nis, around half an hour, begins the region of East Serbia. A picturesque city of Knjazevac and nearby archaeological site Timacum Minus the oldest Roman military fortress in Serbia, Archeo ethno park with Lapidarium in the village Ravna, and famous Serbian Winery Jovic where you can taste wine made from indigenous grape varieties are places of great importance and pleasure that you should visit in East Serbia.

Just 60 km away from Knjazevac, a relatively new mountain and ski resort Hotel Stara Planina become very famous for Serbian and foreign tourists. The meaning of Stara is Old Mountain, but it's also known as Balkan Mountain and stands as a natural border with Bulgaria. It's very rich in waterfalls, even 19 of them including several archaic villages are on the list of must-visit while trekking here. Rural tourism has been on the rise in recent years, and chit-chat with local people is very common. The untouchable nature of Stara Mountain and its highest peak of Serbia Midzor 1839 m, beautiful waterfalls, hiking, mountain biking, sky running, ATV trails, winter sports, attracts nature lovers from all around the world.

The splendid charms of an ancient palace Gamzigrad - Felix Romuliana

The palace represents an artistic achievement of late antiquity 3rd and 4th century. It's the work of Roman Emperor Galerius Velerius Maximinus, who became the heir to the emperor Diocletian, after marrying his daughter Valeria. That the love for his mother knows no bounds was proved when he built a magnificent palace Felix Romuliana in Gamzigrad, near today's Zajecar City, dedicated to his mother Romula. Research has shown that Magura Hill, which is a part of Romuliana, where Galerius and his mother Romula, were buried and listed as constellations of Gods, has been a sacred place of greatest reverence, since prehistoric times.

The charms of wine, love, and the mystical mountain

One of the most beautiful landscapes in the Balkans is the sight of the mystical Rtanj Mountain, which rises as a bare mountain from a flat base, but dense with herbs, and the famous Rtanj healthy herbal tea. It ends in an almost regular shape of the pyramid, as noted by the famous Serbian geographer Jovan Cvijic. There are many legends, stories about aliens, mysterious, and healing powers about Rtanj.

Negotin is the city of wine, and the warrior and a lover Hajduk Veljko Petrovic, and the city where chant music was composing. Negotin wines were gladly consuming in that time in Europe and Russia, and Austro-Hungary had its consulate to trade the wines from Negotin. Somewhere at the end of the 17th century, winegrowers started building sort of stone cellars (Pimnice) Rajac and Rogljevo, where they kept the wine. A visit to these cellars especially on 14th of February, celebrated, as Valentine’s Day all over the world but in Serbia as St. Trifun patron saints of the vine-growers and the day of pruning the grapevines, is an event that everyone should visit at least once in a lifetime.
The famous Negotin composer Mokranjac devoted most of his work to Orthodox spiritual music. The Liturgy, Herumiv Song, and Rukoveti (a collection of songs) are the most beautiful work of Serbian choral music.

Ever since, as a gold-rich landscape has been considered the area of the Pek Valley.  The intensive exploitation of gold from the river sediments of Golden River Pek began with the arrival of the Romans - especially during the reign of Emperor Hadrian (2nd century AD), continuously in the Middle Ages by the Serbian kings. A company, in which King Aleksandar Karadjordjevic was the majority owner, bought a gold digger in the 1930s. They had extracted about 7 tons of pure gold by 1955, after what they sent the digger into the scrap iron.

Industrial processing influenced the gold production from copper ore in the second half of the XX century, while exploitation of the gold by flushing the golden sand has almost ceased. The Manifestation "Motives of Homolje" continuously organizes an annual event of flushing the golden sand by hands from the river Pek, trying to rescue this traditional method from oblivion.

Searching for gold, they found plenty of copper. Serbian industrialist Georg Weifert of German descent, mining expert Felix Hofmann, a German from Banat (Serbia), and the first engineer and explorer of copper ore in the Bor Franjo Sistek, originally from Czech, discovered a treasure they had not hoped for, a copper ore. The Bor open pit, the most impressive artificially created cavity during the copper exploitation in the twentieth century, offers a unique experience to visitors.

The Cave Ceremosnja is more than luxurious in its richness of cave formations. The most beautiful hall in the cave is in shape very reminiscent of the Colosseum amphitheater, which is why it was named Arena. The symbol of Ceremosnja Cave is a beautiful pillar called  On the Eternal Guard.
The Lazar's Cave is the longest explored cave in Serbia. Located in Bor municipality, near the village Zlot, the cave is also sometimes referred to as Zlotska Cave. Since this region is very rich in caves, there are other caves here, Vodena, Mandina, Vernjikica, and Hajducica. All of these caves are known as Zlotska Caves, but only Lazar's Cave is open for tourists.

Rajko's Cave located near Majdanpek got the name after Duke Rajko, who was hiding from the Turks in the cave. This cave was first explored by Jovan Cvijic, back in 1894. According to what is known so far, the corridors of Rajko's Cave are over two kilometers long. An impressive, with beautiful ornaments of snow-white calcite, is one of the most beautiful caves in Serbia.

Treasure of the Djerdap Gorge

Djerdap National Park is also known as the Iron Gates of the River Danube. About Djerdap is in many respects spoken of in the superlative, Europe's most beautiful national park, the greatest naturalistic and archeological museum, and the oldest geological heritage. The Romans gave it the name of the Iron Gate, and today the name Djerdap is derived from the Old Persian word Girdap, which means whirl. The long process of the numerous rocks of various compositions that have emerged from the Paleozoic to the present day, together with the Carpathian mountain, creates the Iron Gates, leaving behind steep and vertical sides that rise above the river level up to 800 meters. The famous explorer Jacques Custo measured the river abyss of Djerdap and claimed that at the site of Gospodjin Vir, the river bottom is at a depth of 90 m. These facts make it the deepest and the biggest river breakthrough in Europe. Djerdap consists of four gorges, Golubac, Gospodjina Vira, Kazan, and Sipska, but the most interesting are the viewpoints, Small and Big Strbac, from where lookout on the Great and Small Kazan where the River Danube demonstrates its narrowest (140m) and deepest (90m) points, live you breathless.

The architectural feat of the ancient world

The Roman border road painstakingly pierced through the gorge and flooded by the hydropower plant in the fifties forever submerged the legacy of the cultures that inhabited its valleys centuries ago. Tabula Traiana stands above the water as evidence of this endeavor, while Trajan’s bridge is sunken in the river forever; only the remains of the two first pillars are still visible on both sides of the river. The stone bridge over the Danube has been the longest in the world for a thousand years and was a masterpiece by the famous architect Aploadar of Damascus.

The rock sculpture of the last Dacian King Decebal is the largest one in Europe and the third in the world. Situated across from Tabula Traiana above the Monastery Mrakoni, does not belong to the ancient epoch but certainly bears witness to it. Despite all efforts to resist the Romans who were interested in the Dacian large mines of gold, Decebal eventually committed suicide to spare himself the humiliation and surrender. Further excavations of the land of Dacia revealed traces of advanced civilization, not the Barbaric one, as it was written in Roman history. The construction of this statue funded Romanian businessman Joseph Konstantin Dragan to keep the history of both sides memorable.

Lepenski Vir is the largest urban settlement in Europe that Serbian archeologist Dragoslav Srejovic has discovered. This ancient culture has known more than 9000 years ago for geometry. Monumental stone sculptures of the fish deities have amazed the world. The Sculpture Progenitor is the first portrait in art history. Lepenski Vir is undoubtedly one of the most significant testimonies of ancestors, and this spectacular archeological site by many experts considered as the cradle of Europe, because right here besides the Danube more than 9000 years ago had lived a peaceful nation who worshiped the mighty river and its deities, which they presented on monumental sculptures of sandstone.

The Danube at Golubac is as wide as the sea, up to 7 km. The entrance to the gorge is defended by the Golubac Fortress from the 14th century, which was a symbol of medieval wars on the Danube border. Its tall towers and ramparts slop beautifully down the riverbank, and it's hexagonal The Hat Tower is a landmark of attractive tourist space.
Traveling through Ottoman Empire and down the Djerdap Riviera, Turkish travel writer Evliya Çelebi recorded a folk tale of the name of Ram Fortress in Smederevo City. It says that Sultan Bayezid I, came to this place set up a prayer mat ihram sat down and said, “On the place of this ihram build me a fortress.

Just 60 km away from Nis is situated Soko Banja, a well-known spa and climate resort in Serbia. Its healing springs were famous throughout history, since Roman baths, the Turkish hammam, and Milos Obrenovic bathroom. Today it is developed into a modern health and recreation center. In the early 20th century, it was a popular place with  Serbian nobility and bohemians. The regular guests of Soko Banja were writers, and actors, like Branislav Nušić, a creator of the famous slogan: Soko Banja – Soko Town, You come old - You go young, Stevan Sremac, Isidora Sekulic, Ivo Andric, and Mesa Selimovic.

The healing effects of these springs strengthen the body and soul, rejuvenate, and relax, maintaining vitality, and a good mood. There are two springs, with the water temperature between 43°C and 53°C. There is a natural inhaler in the Hammam bathroom whose vapors have a usage in the treatment of respiratory diseases. Soko Banja Special Hospital offers to the Spa guests a variety of wellness and fitness programs to improve and preserve health.